Toyota of America and my local dealer could learn a few simple lessons about vehicle and customer service.

I received a follow-up survey from Toyota of America after the local dealer serviced my Toyota Sienna.  The survey was pretty good (I’d probably score it 8 or 9 out of 10 for user experience and gathering satisfaction information). They sent two reminders after the original invitation which is good practice. This article isn’t really a survey evaluation, but rather to show how the follow-up was mishandled with the result being to lower my customer satisfaction.

It’s probably best if I explain what my issue was so that you can read the rest of the article with that in mind. I didn’t realize what had happened until a few days later when I attended a meeting in Seattle that started early evening. It was dark by the time I started driving home, and as I was about to enter the freeway on-ramp, I noticed someone behind me flashing their lights at me. I don’t know if it was just luck that I spotted the flashing and immediately checked; discovering that my headlights were off, I turned them on immediately. I always leave headlights on the automatic setting (in fact having automatic headlights is one thing I look for in a new vehicle), so it was pretty obvious to me that the setting had been changed during the service. It was pretty annoying, and 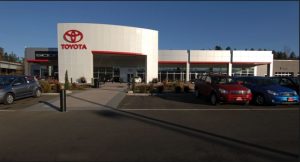 I considered myself lucky not to have been pulled over by the police that evening. Worse, I had actually been pulled over by the police a few months earlier not long after the previous service while driving in a different city. The policeman was very nice and even suggested that the issue might have been caused by the mechanic who did the service.

The policeman suggested that the issue might have been caused by the mechanic who did the service.

I bear part of the responsibility for not following up after the first incident, and I guess also for not remembering after the subsequent service. However, I think the majority of the blame should be directed to the service organization. Later I noticed one other setting change that I believe was the result of the service, but I wasn’t 100% certain. We’d been going through a period of poor air quality locally; I followed advice to change air conditioning to “recirculate”. This was less impactful to me personally than the light setting, but could have been more of a concern to people who are more susceptible to poor air quality.

Before I move on to the post-service saga, I’ll comment on a couple of things in the survey that got in the way of me being able to communicate my issue and ask for follow-up.

At the end of the survey, there was a thank you page which included information about how to contact the dealer and a link and phone number for the Toyota Customer Experience Center.

That’s what I was hoping for. I chose the topic “Dealership Service Experience”, and in the open-ended box I explained why was unhappy, and that the proper solution would be for the service technician to note the settings and return them to the way they were when the vehicle. With the complexity of vehicles these days, owners shouldn’t have to repeat what they went through when they first acquired the car.

With the complexity of vehicles these days, owners shouldn’t have to repeat what they went through when they first acquired the car.

After submitting the survey, I received an automated follow-up immediately from Toyota of America promising a “tailored response as quickly as possible”. I like the tone of this phrase because it doesn’t promise too much. If they had stated that the response would be within a certain period of time I would have expected some follow-up within the stated time-frame even if Toyota did not yet have a complete answer.

The series of emails from Toyota of America and the dealer was quite a saga, lasting 43 days from when I first filled out the post-service survey. I’ll spare you most of the details and summarize the key points here.

The response from the dealer was exactly what I’d asked for in the first place. However, this experience was not a shining example of how to improve customer satisfaction.

I waited to publish this until after the next service so that I would be able to see if the dealer had changed their procedures. This time, the light switch was set as I had left it — on automatic — so that was a positive change. However, it appeared that something had changed with the audio settings, and that it was most likely due to removing the battery to test it which was part of this scheduled service. I’m not certain if my interpretation is accurate, but it would have been good customer service to remind me to check settings if battery removal was part of the service.

More troubling was an email I received from the service advisor a couple of days after the service.

“You may receive an email survey from Toyota National about your recent visit. This survey is my personal report card and is very important to me. It would be greatly appreciated if you could take a moment to fill it out. Anything less than 10’s, yes’s, and truly exceptional in all areas is considered a failing score by our standards. If for any reason I have not met these standards please feel free to contact me or my service manager.”

I’ve experienced higher pressure communications from employees of other companies, but statements that emphasize the desire for high scores rather than requesting honest feedback are not consistent with maintaining or improving high customer satisfaction.  More on this in another article; for now let’s just say “don’t do this!”.

Business people generally believe that satisfying customers is a good thing, but they don’t necessarily understand the link between satisfaction and profits. This is partly because much of the original work was done so long ago that contradictory cases and nuances have allowed confusion to build up. Additionally, some companies have appeared successful for a time despite poor satisfaction, generally in industries where there is limited or no competition such as airlines.

END_OF_DOCUMENT_TOKEN_TO_BE_REPLACED

5 Circles Research has been a terrific research partner for our company. Mike combines a wealth of experience in research methodology and analytics with a truly strategic perspective – it’s a unique combination that has helped our company uncover important insights to drive business decisions.

I hired Mike to develop, execute and report on a market research project involving a potential business opportunity. I was impressed with his ability to learn the industry and subsequently develop a framework for the market research project. He was able to execute the research and collect data efficiently and effectively. Throughout the project, he kept me abreast of the progress to allow for any adjustments as needed. The quality and quantitative output of the results exceeded my expectations and provided me with more confidence in the direction of the business opportunity.

First, I thought it was near impossible to obtain good market information without a large scale, complex market study. Working with 5 Circle Research changed that. We were able to put together a comprehensive survey that provided essential information the company was looking for. It started with general questions gradually evolving to specifics in a fast pace, fun to take questionnaire. Introducing “a new way of doing things” like Revollex’ induction heating-susceptor technology can be challenging. The results provided critical data to help understand the market demand. High quality work, regard for schedule, thorough understanding of the issues are just a few aspects of an overall exceptional experience.

Since becoming our contracted consultant for market research services in 2010, 5 Circles Research has revolutionized our annual survey of consumer opinion in Washington. Through the restructuring of survey methodology and the application of new analytical tools, they have provided insights that are both wider in their scope and deeper in their relevance for understanding consumer values and behavior. As a result, the survey has increased its significance as a planning and evaluation tool for our entire state agency. 5 Circles does great work!

Great workshop! You know this field cold, and it’s refreshing to see someone focused on research for entrepreneurs.

I have come to know both Mike and Stefan as creative, thoughtful, and very diligent research consultants. They were always willing to go further to make sure respondents remained engaged and any research results were applicable and of immediate use to us here at Bellevue CE. They were partners and thought leaders on the project. I am happy to recommend them to any public sector client.

What we were doing was offering not just a new product, but a new market niche. We needed to understand traditional markets well to characterize the new one. Most valuable was 5 Circles ability to gather research data and synthesize it.

When you work with a market research company you normally have to define the questions. 5 Circles Marketing’s staff have technical backgrounds, so it’s a lot easier to work with them.

You know how your mechanic knows what’s wrong with your car when you just tell them what it sounds like over the phone? Well, my first conversation with Mike was like that — in like 10 seconds, he gave me an insight into my market research that was something I’d been struggling trying to figure out. A class like this will help you learn what you can do on your own. And, you’ll have a better idea of what a research vendor can do for you.

Mike brings a tremendous balance of theoretical marketing research with a strong practical knowledge of marketing. He can tailor the research to the right level for your project. I have hired Mike multiple times and he has delivered each time. I would hire him again.

An article on Dutch ovens in the September/October 2018 of Cook’s Illustrated gives food for thought (pun intended) about the relationship of between price and value. Sometimes higher value for a buyer means paying a lot more money – good news for the seller too. Dutch ovens (also known as casseroles or cocottes) are multipurpose, [Read More]

Business people generally believe that satisfying customers is a good thing, but they don’t necessarily understand the link between satisfaction and profits. [Read More]